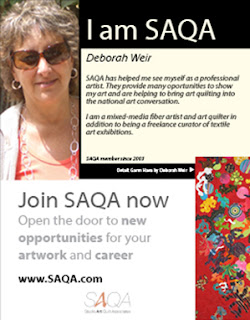 What is greener than chlorophyll! 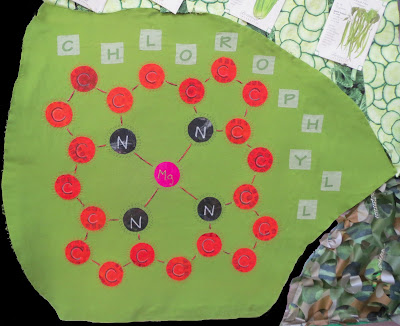 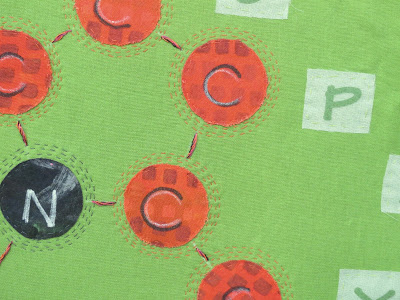 Posted by Deborah Weir at 10:45 AM 2 comments:
Email ThisBlogThis!Share to TwitterShare to FacebookShare to Pinterest

This is my textile interpretation of Susan Willen's paper collage.  We have all the collages done and framed so we're ready to start setting up some exhibits so EVERYONE can enjoy them.   I'll post the whole show when we have everything photographed. 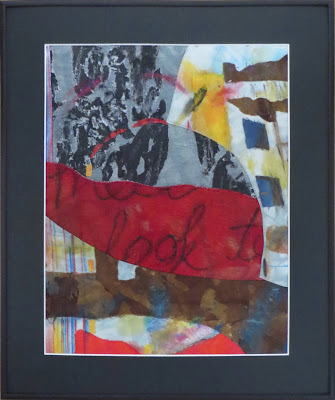 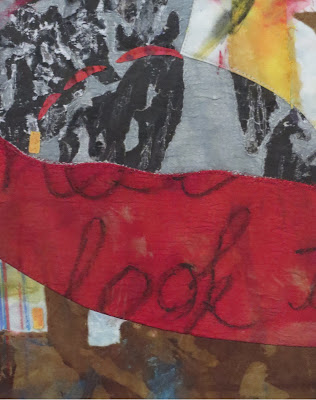 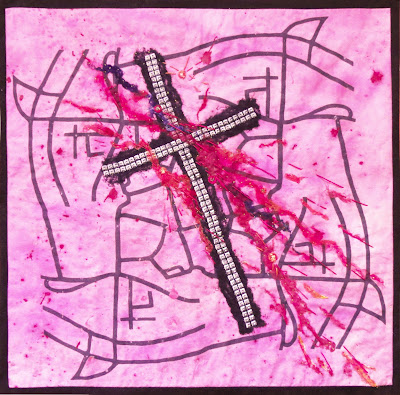 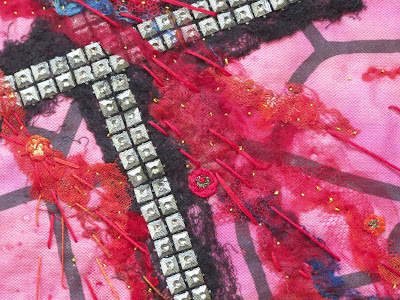 In early 2013 I saw an announcement requesting entries for art quilts in an exhibit entitled Light, Hope, Opportunity sponsored by Quilt for Change, a group out of Rhode Island.  Rules were straight-forward: 24” square art quilt on the theme of how insufficient energy sources impact women worldwide.   I knew at once that I wanted to do a piece on the Mexican women working at American maquilladoras in Juarez, Mexico.  These unskilled, minimally paid, mostly young women make products for the American consumer market in well-equipped modern factories.  Hundreds of them, upon leaving work, walk home, often after dark, and have been raped and murdered. There is no safe transit for them, and much of the city is not properly illuminated: no light, little hope, trifling opportunity.

Though I have done a lot of artwork on global themes – mostly focusing on water    issues – this one especially touched me.  I carefully thought through and designed a    piece I hoped would tell the story in 576 square inches; I named it Juarez.  Pink is a    color I rarely use but here I dyed the background fabric pink and sprayed it in a    splatter pattern with red ink to indicate both female and blood – pretty common    symbols.  I chose to build a cross from some Indian metal chain.  Mexico is a country    in which every city and town has a Catholic church and the cruciform symbol is as    richly complex as one can be; it runs the gamut of love, motherhood, protection to    deceit, violence, male dominance and material wealth.  And MUCH else.  I am not    personally a member of a religion which employs the cross in its symbology, but I   am well aware of its pervasive and varied connotations.

Onto the pink ground I printed a schematic map of Juarez where it meets the US border, applied the metal cruciform then richly hand embroidered dimensionally across the underlying materials, enhancing and quite graphically depicting the blood and emotional loss which represent the theme of the piece – lack of light and transit in Juarez allowing for horrific crimes against these women.  The artwork is intentionally disturbing, which is appropriate to the theme.

Quilt for Change requested images of the work in progress which I sent, and I was eventually delighted to learn that Juarez had been accepted into their traveling exhibition (2013-2015).  Off the show went in June, 2013, to its grand opening at the Palais des Nations, the United Nations’ headquarter in Geneva, Switzerland.  What a thrill!  Beautiful building, thousands of people walking through, nice display panels but . . . what’s this???  My work was tossed by the UN Cultural Commission at the last minute.  While pictures of bright-eyed Moslem girls in headscarves were fine, a cross on a piece about Mexico is no go.

I realize I’m in GREAT company:  James Joyce, Mark Twain, Marc Chagall, John Steinbeck, Ai Weiwei, etc., etc., all had work banned.  But shame on the UN, an organization I’ve had nothing but respect for up to this point, for shying away from unpleasant truth.  Light?  Hope?  Definitely NO opportunity.

The show will travel to various venues in the US, and I’ve been told Juarez will take its rightful place in the exhibits when it does.  Will it disturb some viewers?  I certainly hope so!
Posted by Deborah Weir at 5:12 PM 7 comments:
Email ThisBlogThis!Share to TwitterShare to FacebookShare to Pinterest
Newer Posts Older Posts Home
Subscribe to: Posts (Atom)