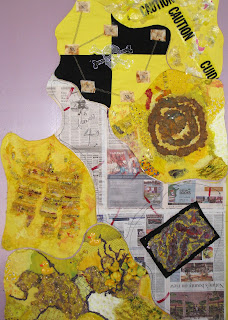 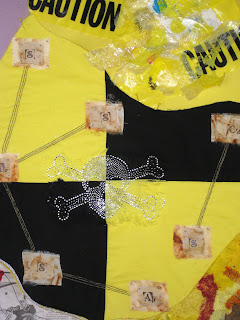 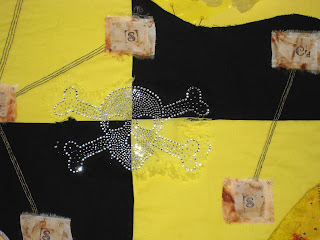 In spite of getting two big shows open last weekend I have been able to get back to work on my Chroma series and have finished the fourth portion of the design.  This one honors illnesses associated with the color yellow.  Ships carrying crew or passengers sick with the plague  were required to fly this flag essentially quarantining it.  And the two elements: cadmium sulphide and arsenic sulphide, were used in dye and paint recipes for the brilliant yellow they produced.  Many's the early chemist who lost his health in the making!  Believe it or not I actually had to remake this module three times to get the simplicity I wanted.  Was there a yellow curse??!?!!
Posted by Deborah Weir at 4:32 PM
Email ThisBlogThis!Share to TwitterShare to FacebookShare to Pinterest